Christiana was a final year university student in a 4 year teacher prapeartion programme. To become a teacher in Cyprus you take part in a 4 year university degree in elementary education. Students are trained to teach all subjects and with the completion of the programme they are considered qualified teachers. During the last year of the progrmme students choose an area of specilisation and take part in a school based teaching experience.  Christiana was in her last years of her training and she chose to specialise in mathematics. Mathematics was one of her favourite subjects and she had a very positive attitude to it, both at school and university. I observed Christiana teaching during the last year of her four year teacher preparation programme during a school placement.  The example below comes from a lesson with a year 5 class ( pupils age 10-11) on division by multiples of ten.

During her lesson on division by multiples of ten Christiana proposed the activity shown in Figure 1. The version of the activity as proposed in the students’ book is also presented. Both activities have been translated from Greek. 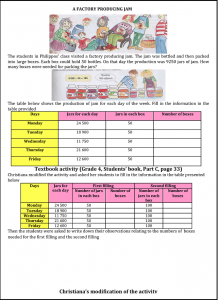 The activity was given to students towards the end of the lesson and there was no time for class discussion.  The only discussion that took place is shown below:

Christiana:       What do you observe happening?

The  discussion ended there because the students had to move to their next lesson. Christiana said that they will discuss the activity during their next lesson. Christiana’s chosen activity suggests that for her it was important that her students develop knowledge that went beyond simply knowing how, to include knowing why. In adition during the next lesson which was not observed Christiana writen in her suggested lesson plan that she was going to discuss in detail the number of boxes needed in Wednesday. Wednesday disrupts the pattern that dividing by 100 will give answer half of that dividng by fifty.