The National Curriculum for mathematics in England introduces trigonometric relationships in Key Stage 4 (years 10 and 11, pupil age 14-16). Lucy was reviewing the idea of a trigonometric ratio with her class, before moving on to discuss how to calculate the size of an angle in a right-angled triangle, given the lengths of two sides. Lucy was a graduate pre-service teacher, and the lesson took place in a school-based placement towards the end of her one-year teacher preparation.

Lucy, a graduate student-teacher, was teaching in an open entry secondary school (pupil age 11-18) in a small town in the UK. The school divides the year group into mathematics sets (by ‘ability’) and Lucy was teaching one of the two parallel top groups. This was the final lesson of a series of three in which she had introduced the idea of trigonometric ratios with a Year 10 (pupil age 14-15) class.

There was an interactive whiteboard in the classroom and Lucy had prepared a series of slides for the lesson. On the first of these, she had a right-angled triangle which she used as an example to ask the pupils which ratio gave the tangent of a marked angle. The triangle was labelled with the lengths of the sides (8cm, 15cm and 17cm) and one angle was marked as  θ. 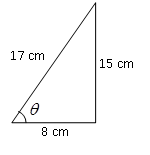 The discussion of Lucy’s lesson included the following:

Lucy                Em, I wanted to use a right-angle triangle that had integer length sides ... because I didn’t want that to be another thing that might intimidate them.  And because of the length of the sides weren’t really significant, it was more the relationship between them. …

Researcher      But there are other right-angle triangles with integer sides.

Researcher      That’s really interesting.  So it was partially dictated by the triangle that you had on the whiteboard. … And then finding numbers that fitted.

Lucy had selected an 8-15-17 triangle as her example for a right-angled triangle. When the research team saw this choice it struck us as an interesting choice since 3-4-5 triangles are probably the most used example for right-angled triangles and yet Lucy had chosen a very different one. One of the team had taught her number theory as an undergraduate and Pythagorean triples were part of that course. So what had made her choose this example rather than a 3-4-5 or even 5-12-13 triangle?

In the post lesson interview, it became clear that a range of factors had influenced Lucy’s decision. Firstly, because she was using an interactive whiteboard, she had access to ready made templates for a right-angled triangle. She knew that she wanted integer sides for her triangle but discounted the first two well known examples (3-4-5 and 5-12-13) which did not fit the proportions of the template as well as she wished, so she chose ‘the next one up’. Although she did not make direct reference to her number theory course, part of her mathematical knowledge is that there is a wealth of triangles with integer length sides. She was able to draw on this knowledge, albeit with some ‘research to make sure’.

This scenario could readily be classified in the Transformation dimension as a ‘choice of example’ but the underlying thinking in Lucy’s decision is directly related to her own subject knowledge.

Of course, teachers display ‘overt knowledge’ all the time when they demonstrate that they know themselves the subject matter that has been selected for the class to learn. Most of the time, this is expected and unremarkable: deciding when the knowledge displayed somehow goes beyond this is necessarily subjective. In this case, we judged that one could not presume that every secondary mathematics teacher – in England, at least – has access to a personal repertoire of Pythagorean Triples, and that Lucy’s overt display was therefore worthy of note.