Contributed by: Tracy Weston, The University of Alabama, USA

As is the case in the United States, North Carolina has state mandated goals and objectives for mathematics instruction at each grade level.  The North Carolina Standard Course of Study (NCSCOS) indicates that in grades 4, “Students will solve relevant and authentic problems.” This school used the enVisions curriculum, as mandated by the district (local authority).  Students in this school were grouped by ability level for math instruction, and McKenzie’s class was the AG (academically gifted)/most advanced students of the five, fourth grade classes.  An objective present at both fourth and fifth grade that applied to this portion of the lesson was: “Develop flexibility in solving problems by selecting strategies and using mental computation, estimation, calculators or computers, and paper and pencil.” (NCSCOS)

McKenzie was an undergraduate pre-service teacher, and the lesson took place in a school-based placement in mid-April of her final semester (which concluded within a week of this lesson) in the teacher education program.

At the end of the lesson, McKenzie gave the students three “logic problems,” as she called them.

McKenzie, an undergraduate student-teacher, was providing practice on problem solving concepts with a Grade 4 (pupil age 9-10) class. The pupils were seated at their desks, and watched as McKenzie presented the lesson on the interactive whiteboard.  She showed the class slides she made ahead of time.

For the final part of the lesson, McKenzie told students they were going to do “logic problems” and asked them to get a clean sheet of paper on their desk.  On the interactive whiteboard she showed a slide that displayed the following problem:

In 3 moves, rearrange the coins [picture displayed] so that the 3 quarters are together and the 2 pennies

are together with no empty spaces in between each coin. At the end of each move, the coins must always

be in a line as in the original configuration.

McKenzie explained the last stipulation concerning no empty spaces meant there could not be a gap/space in the line.  After checking that students understood the problem, students were asked to work independently for 30 seconds.  Then a student was called to the board to present and explain the solution to the class.  Following a few questions from McKenzie, she had the student sit down and the next problem was presented, which was as follows:

simultaneously return where they started?

McKenzie explained this problem by saying:

Students were asked to work independently, but then McKenzie changed her mind and told the class they could work in small groups with the students at nearby desks.  After a few minutes of work time, a student was called to the board to present the solution strategy to the class.  Following a brief discussion, the next problem was presented, which was as follows:

Place the numbers 1-9 in the circles below such that each side of the triangle adds up to 17. 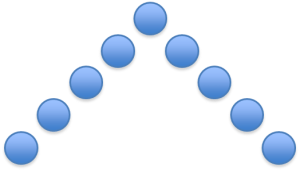 The same process of work time followed by a brief demonstration by a student was followed as with the first two problems.

Contributed by: Tracy Weston, The University of Alabama, USA

Knowledge Quartet Code: Choice and Use of Examples (CUE)

Within low cognitive demand, tasks may be characterized by “reproducing previously learned facts, rules, formulas or definitions or committing these to memory” (Stein et al., 2000).  They may also be characterized by a task or solution that is algorithmic and relies upon “the use of a procedure that either is specifically called for or is evident from prior instruction and/or experience” and there is “little ambiguity about what needs to be done and how to do it” (Stein et al., 2000).

High cognitive demand tasks can be characterized by “focusing students’ attention on the use of procedures for the purpose of developing deeper understanding of mathematical concepts and ideas...can usually be represented in multiple ways.” Although these tasks may be solved by using procedures “they cannot be followed mindlessly” (Stein et al., 2000). These tasks may also be characterized by “complex, non-algorithmic thinking” which “requires considerable cognitive effort” as students “explore and understand the nature of mathematical concepts, processes, or relationships” (Stein et al., 2000).

This classroom episode is chosen as an example of CUE, specifically in terms of choice of examples.  While McKenzie was not as facile with enacting the tasks, as she often lowered the relative cognitive demand by giving the students leading “hints,” the choice of the examples as initially presented required a high level of cognitive demand.  These examples required students to engage in complex, non-algorithmic thinking and required considerable effort for fourth graders to solve.  Therefore, they are offered as an example of CUE.